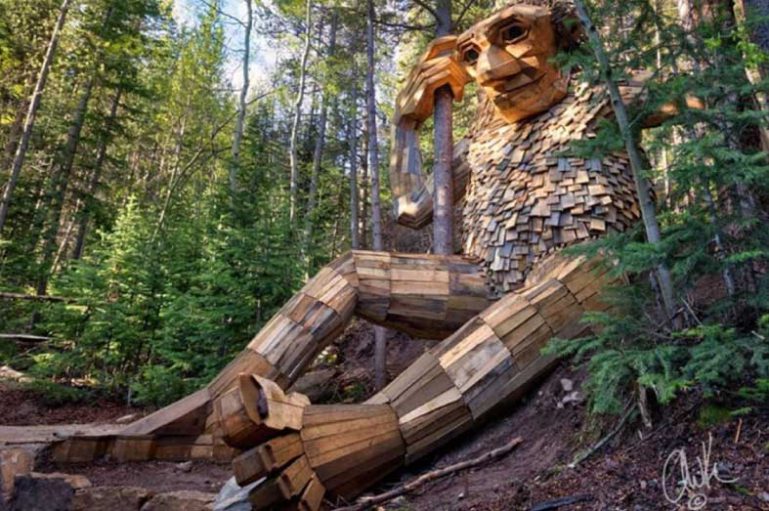 He’s Back! The Story of Isak Heartstone & How To Visit Him

by Shannon Sinard 3 years ago no comments

Some may remember the controversy that arose in Breckenridge late last Fall when it was decided that Isak Heartstone, an imaginative art piece created by Danish artist Thomas Dambo during the 2018 Breckenridge International Festival of Arts, would be disassembled and no longer accessible for tourists to visit.. Well, here in Breckenridge we are overjoyed to announce, he’s back!

So, who is Isak Heartstone? Initially created as a temporary installation during BIFA(the Breckenridge International Festival of Arts), Isak Heartstone was a larger than life wooden troll assembled by Thomas Dambo, an artist and designer who specializes in creating imaginative pieces from recycled materials. Masterfully constructed out of pallets and recycled wood, the kindly troll acquired his name after three local girls brought Dambo a heart-shaped rock during his assembly. The captivating troll with soulful eyes and a friendly face rapidly gained traction on social media and, due to his popularity, Isak remained intact well past his initial deconstruction date in late August so that more would have the opportunity to visit him.

However, Isak’s overwhelming popularity soon became his demise. Originally constructed along a trail behind the residential Wellington neighborhood, thousands of visitors flocked to this otherwise quiet corner of Breckenridge to catch a glimpse of the wooden creature. Use of the free shuttle bus from downtown Breckenridge to this neighborhood (soon nicknamed the “Troll Trolley”) exploded after Isak’s arrival – jumping from just 7,500 riders in October 2017 to 16,500 in the same month 2018. Many residents of the neighborhood began to feel inundated.

“Imagine 10,000 people knocking on your door, asking you directions,” says Girvin, a member of the town’s Creative Arts Councile, which commissioned the artwork for $40,000.

So, after several heated debates (from both Isak supporters and detractors) it was decided that Isak would be dismantled. However, realizing the magnetism of Isak, the town promised that he would return as soon as they could find a more suitable home and sustainable trail for his hoards of visitors.

So, in May 2019, Dambo returned to Breckenridge to begin the recreation of the friendly troll that had gained such a following the prior year. After a ceremonial placement of Isak’s ‘heartstone’ (by the same local children who placed the stone in the original Isak last year) and several weeks of work by the town to create ‘Trollstigen Trail’ (a more accessible and sustainable trail for visitors) it was announced on June 24, 2019 that Isak Heartstone was ready for his comeback! Now residing on the Illinois Gulch Trail (just behind the Stephen C. West Ice Arena on the South side of town) the 15-foot tall wooden troll structure is ready to welcome visitors from far and near to his new home!

So how can you access Isak? First, it is important that all who plan to visit Isak be aware that there is no available parking near him (strictly enforced). So, to embark on the journey to find Isak, walking or taking one of Breckenridge’s FREE public transportation options is recommended.

>> Walking/Hiking to Isak Heartstone :
(About a 15 minute walk from the Breckenridge Welcome Center)

>> Take the Breck Free Ride or Free Summit Stage Bus to Isak Heartstone :
Both the Breck Free Ride & Summit pick up regularly from the Breckenridge Transfer Center (next to the base of the BreckConnect Gondola and just behind the Ski Country Resorts office/check in location). Let your driver know that you are headed to see Isak and they will ensure you are on the right bus.