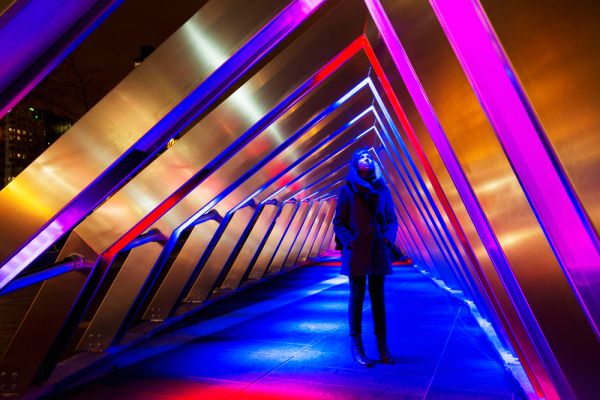 by Shannon Sinard 4 years ago no comments

Returning for its fourth year since it was introduced in 2016, the annual Breckenridge Spring festival, WAVE (a contemporary art festival that highlights light installations, digital projections, musical performances and other creative ventures), will return to Breckenridge May 30 – June 2, 2019. During this free, four day festival a handful of artists (both domestic and international) will participate in completely transforming the Blue River Plaza in Breckenridge by creating immersive and interactive art displays that will challenge visitors and locals alike to see the idyllic mountain town in a whole new light (pun intended).

A celebration of light, water and sound, this family friendly event has quickly become a favorite amongst many – even earning the reward of ‘Best New Festival’ by Westword Magazine in 2017. During the event, the quaint Victorian themed town of Breckenridge will see its public spaces become canvases for a series of cutting-edge, public art pieces, from Cloud, a large-scale interactive work sculpted from 6,000 incandescent light bulbs to resemble a cloud, to Loop, An optical toy and cross between a music box and railway handcar that projects black and white images.

The exhibitions will be oversized and flashy, taking over the town’s bridges, waterfront area and even some downtown buildings. And, just so you can’t miss them, they light up! When originally conceptualized by the Breckenridge Creative Arts (BCA), the vision was something similar to other successful, plugged in events such as Canal Convergence in Scottsdale, AZ, which draws crowds from all over to see glimmering sculptures placed along its waterfront. And while there are big light festivals across the world, like Sydney and Amsterdam, none of the sort yet existed in Colorado. Although WAVE is, admittedly, a scaled-down version of some of these larger, more established festivals, “The idea was to take that concept but align it with a historic, Victorian mining town.” Robb Woulfe, CEO of Breckenridge Creative Arts explains.

“WAVE exemplifies the idea that art is for everyone.” says Robb. “The large-scale, interactive artworks are freely accessible to all and inviting in a way that traditional gallery exhibitions are not.”

WAVE is also changing visitor’s minds about what a mountain vacation can offer. While many perceive a trip to Breckenridge as one that involves some type of outdoor sport (skiing, hiking, biking, etc) this festival moves beyond physical activities and into the artistic, philosophic and entertainment realms. Of course, if you want the best of both worlds, there is plenty of time for a hike or bike ride each day before the five main installations heat up nightly, from 3pm – 11pm.

For a complete schedule of events visit : go.skicountry.com/wave